OSVSWA has implemented this ‘Community Governance in Infrastructure Services’ project (co-funded by European Commission) in collaboration with Practical Action in India.

According to the 73rd Amendment of Indian Constitution with the help of different government and non government organisations, many steps have been taken to strengthen the capacities of community governance system both through creating awareness and building capacities of different stakeholders at various circumstances but resulted not upto that extent. There are many policies made and practised for impact oriented participatory plan preparation and execution as well as community’s involvement for its sustainability, but in practice it deviates so we lack behind.

Community Governance: As we know, community governance is an approach of formulation and execution of collective action at the local level. It encompasses direct and indirect roles of formal institutions of local government hierarchies, Non State Actors (NSAs that are involved in the development process other than the government) and role of community and community organizations as primary stakeholders. To find out the community needs and building capacities of the rural poor, marginalized, deprived and people left behind towards better and effective participation in the decision making process for their own and community’s sustainable development, the concept of community governance mechanism is emerged and we are putting effort to practise it optimally.

Looking at the conspicuous requirement of attaining the issue, OSVSWA in collaboration with Practical Action has co-thought for putting an effort to reducing poverty by improving in the rural development process through promoting participatory approach of development (infrastructure development), where all stakeholders owe a stake from planning and decision making to execution and maintenance for sustainability. With this vision, the initiative “Community Governance in Infrastructure Services” was planned and commenced in Orissa within India from 1st April 2009.

The process will unanimously contribute towards reducing poverty and improve the quality of life of poor and marginalized sections of the community through providing improved infrastructure services. This is aimed to be achieved through building the capacities of the communities, local government systems, NSAs to mainstream the participation of poor and marginalized men, women, aged, children and disabled people inclusive of caste and creed in consultative and decision making processes through developing, practicing and disseminating innovative mechanisms on community governance in planning, implementation and delivery of infrastructure services. This project is replicated through scaling-up the good practices of past experiences in other places, so it is expected that there would be wider acceptance of this approach at the national and regional level.


Process Target: This process will be addressing the following aspects:

Poor and marginalized people demand greater say in decision making but this is not possible without enhancing their knowledge, capacities, and their abilities to interact with decision makers.

Poor people can network and learn from each other for common interest.

Poor people understand greater role in participating in the processes, strategies, and plans that have been agreed between poor people and local government for sustainable development cause.

OSVSWA following up the community governance approach and replicating the same in its community based infrastructure development projects as well as decision making activities in all its operation areas. 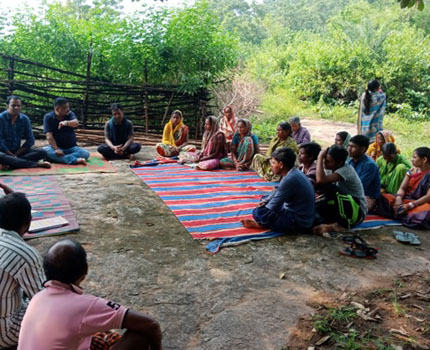